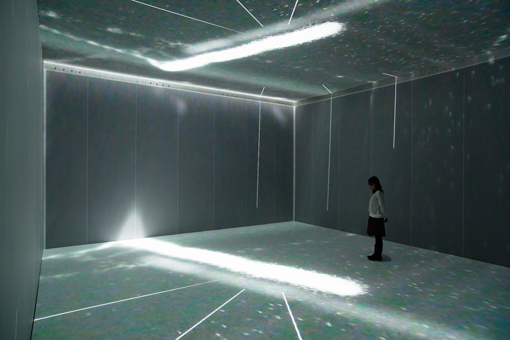 polar m [mirrored] refers to the artists’ earlier collaborative work polar (2000). while the original work was concerned with the notion of interactive networks creating an intelligent matrix, polar m [mirrored] is aimed at questioning the relevance of the viewer/visitor and focusing on the work of art as an autonomous subject in an infinite universe. by creating a both physical and cognitive topography polar m [mirrored] is devoted to the exploration of fundamental physics, to experience interrelations of macro and micro structures and forces of our universe. visual radiance, along with α, β and γ and electromagnetic radiation are the dynamic triggers of the polar m [mirrored] system. various instruments/observatoria – a cloud chamber, high frequency radio receivers and geiger counters – observe, analyse and transform processes of nature, both man-made and cosmic, into audio and video signals again within the scope of human perception. polar m [mirrored] questions the edges of perception; uncertainty relation (error is intrinsic due to presence of observer) and quantum physics (events are only subject to probability as observer is excluded) collide and challenge the limits of understanding our environment. a universe of its own, polar m [mirrored] is a place to consider human belief in technological progress and our permanent quest for the foundations of our physical world.